An unforgettable time in Ecuador 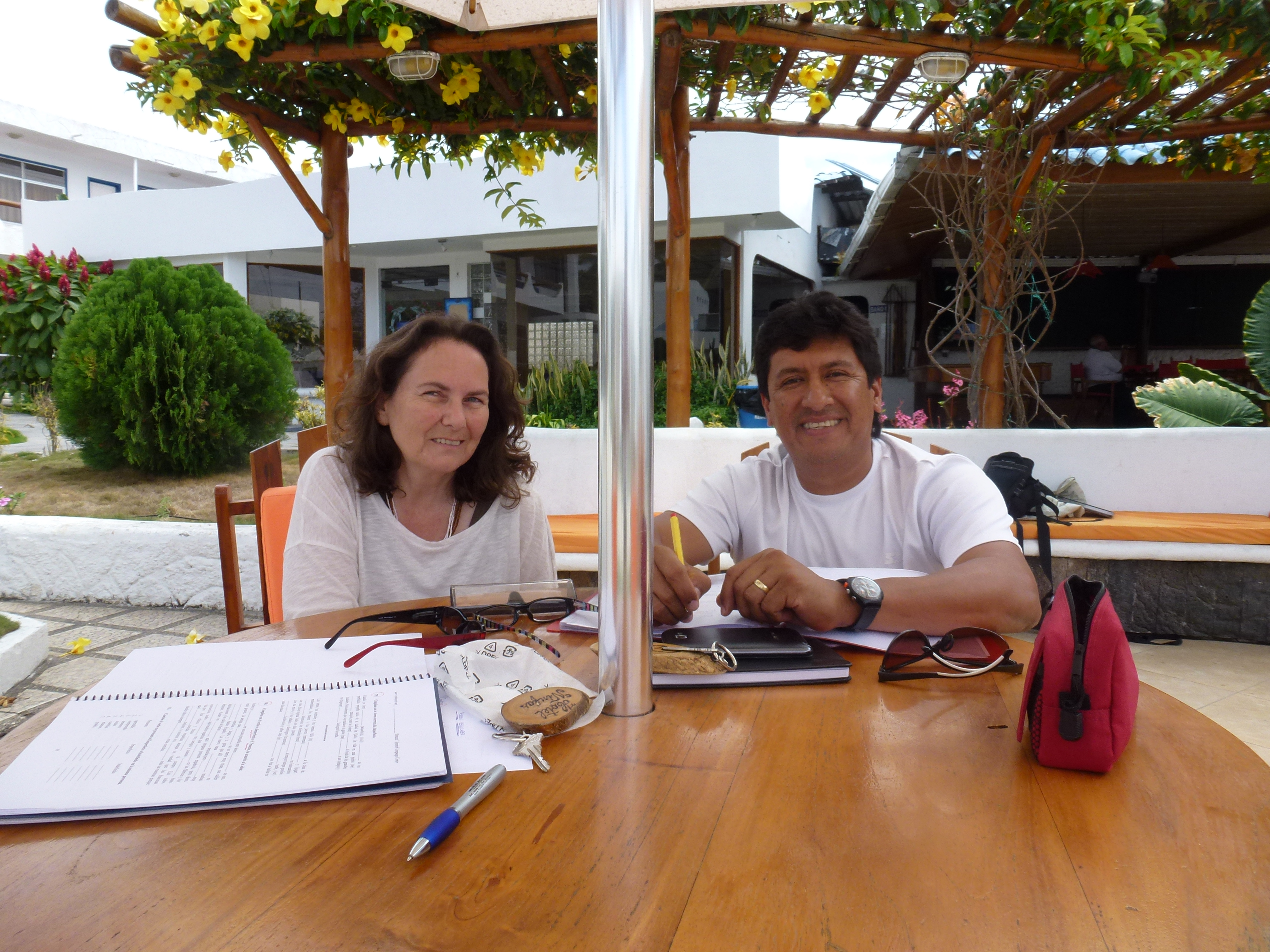 Christine Schmid studied Spanish with us and got to know the beauty of Ecuador on our tours. After returning to Switzerland she sent us the following report. Many thanks to Christine.

What to do if you want to learn Spanish as fast as possible but you don't have 3 months or even more time to spend in a Spanish speaking country? Well, I had 4 weeks off and wanted to get on with my Spanish skills and to get to know the country and the people and at the same time make holidays and dive into an other world. During my search I've found Sintaxis who offered Spanish courses at all nice places in Ecuador in combination with travelling around. You could call this concept "flying classroom". I love it at first sight. 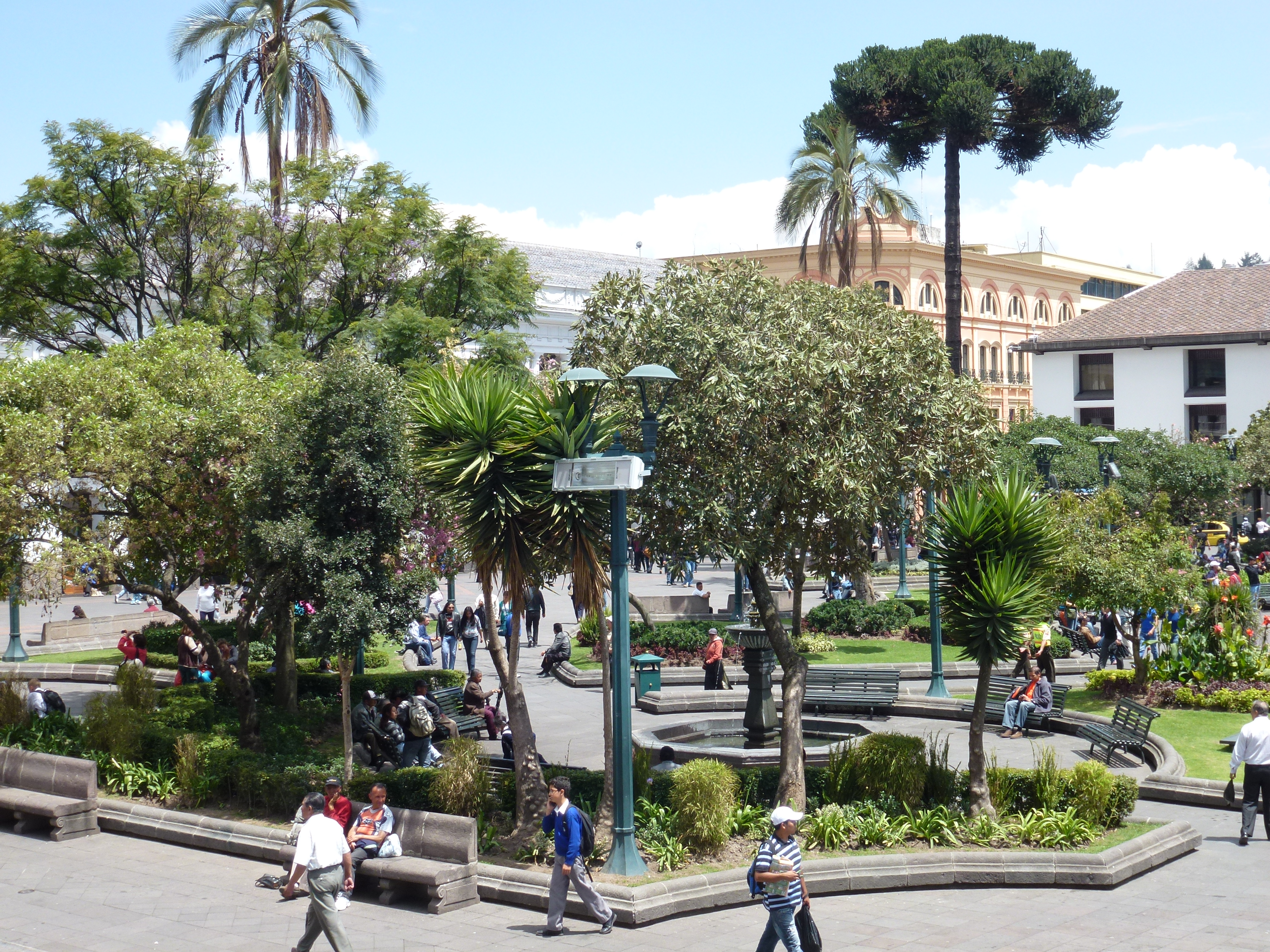 Having arrived at the Quito airport I've been picked up and driven to the hotel by Enrique Guzman. For my stay I had booked a hotel instead of an accomodation at a host family. The Sintaxis school was near to my hotel and quite comfortable to reach on foot. After the Spanish classes which took place during the mornings for 4 hours I used the afternoon to get to know Quito and to try out my Spanish skills... comó se dice? …..qué significa?... Although in Ecuador a clear Spanish is spoken I didn't understand every word always immediately ... and even when I understood I sometimes didn't know how I should interpret it... for example on the markets they always say "a la orden". I didn't know what that means. But my teacher helped me also with such questions. The final hours of my week in Quito I've spent on a city tour in the historical center of Quito. Enrique told me a lot about the history and the cultural backgrounds of the city.

Now I was excited about my week in the jungle in the Samona Lodge in the Cuyabeno Nationalpark. How would the accomodation be like...? What kind of animals would be waiting for me? And how would that work with the Spanish classes?

Yes, the big lagoon was exactly as beautiful as on the pictures I had seen. A nice and quiet oasis of water. The trees standing in the water and the red sky in the evening hours which was reflected in the water was a strange and unusual sight. But it was breathtaking and overwhelming. The accomodation (Samona Lodge) was simple without light but with shower and toilet in every room. Candles along the paths and in the accomodations made a very special ambiance. The Spanish classes took place between oder during the excursions. During the other tourists relaxed reading a good book or hanging around in the hammocks I was taught the grammar parts and in writing. The learned Spanish could be practiced in conversations during the excursions or at the table (breakfast/lunch/dinner).

On the excursions we saw come Anacondas that were taking a sunbath on the trees in the big lagoon. We also saw some monkeys, some sloths, various birds, some leafcutter ants, some tarantulas, some scorpions and even some pink river dolphins. The best excursion was when we went to the big lagoon by canoes. It was just great. Very quiet and peaceful. No motor noises that could disturb. Like this we could move between the trees and even closer to the anmials and above all the birds... and in the end we also had a great swim in the big lagoon... simple life can be so wonderful.

Galapagos was next but the same questions appeared: "What expects me there?" I had decided to stay on the island Santa Cruz and to continue the Spanish classes there.

Already the first promenade in Puerto Ayora surprised me. On the way to the port we met see lions AND the famous iguanas. Crabs, pelicans, frigate birds... all just a few meters away! Puerto Ayora is a nice little town with shops restaurants some hotels and a port from where the boat excursions or also the cruises start.  Depending on the wheather we mad the Spanish classes during the morning or the afternoon and the other half of the day we made excursions on the island or by boat. 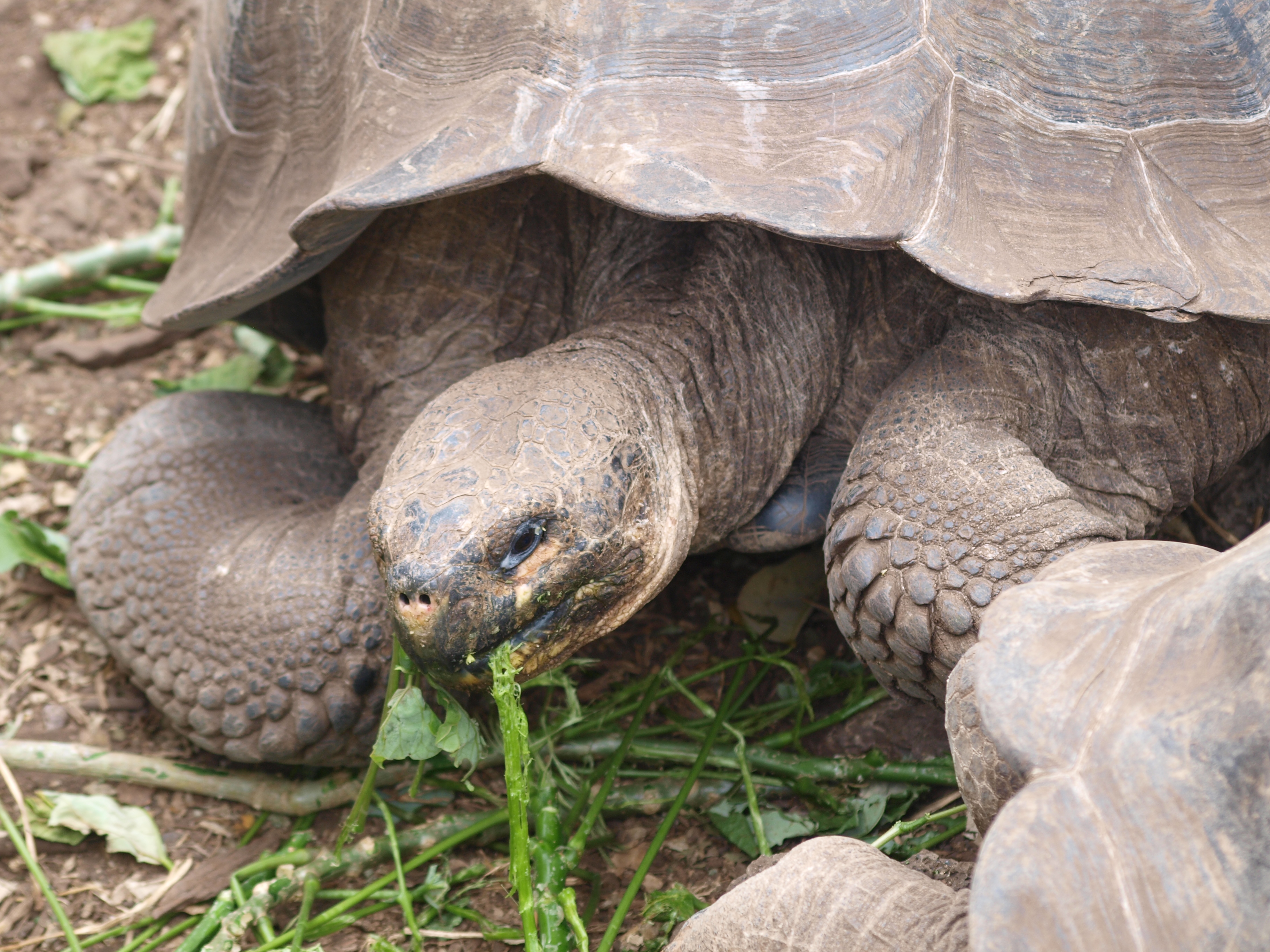 We've visited the Charles Darwin Station and saw the big turtles. We've gone to tortuga bay. An endless long wonderful beach with white sand, turquoise water and a protected bay for swimming and snorkeling and ...  wow! ... Enrique had organized a kayak. With this kayak we could discover the bay on the water. We saw blue footed boobies, pelicanes, turtles, mantas and sharks and ... of course ... the famous iguanas.

Another day we drove by boat on the ocean. Snorkeling with sea lions! So I could watch the sea lions not only above but also under the water. Allthough the water was pretty cold I just loved it. After that we saw some turtles during snorkeling. They were so close that we would have been able to touch them and let us being pulled through the water by them. To finish the excursion we drove to "La Grieta" which is a chasm filled with ocean and rain water. It was a pleasure to dive into this clear and not that salty water at the end of this eventful day.

If you now think I've just made holidays you are wrong! On Galapagos I did not only read a lot but also was taught all the different tenses of the Spanish language. And although the "flying classroom" took place in courtyard of the hote near the swimming pool and under orange coloured bougainvilleas was it really taff and "hard work". I was rewarded with a notable progress in the simple conversations during the meals and also during the excursions. 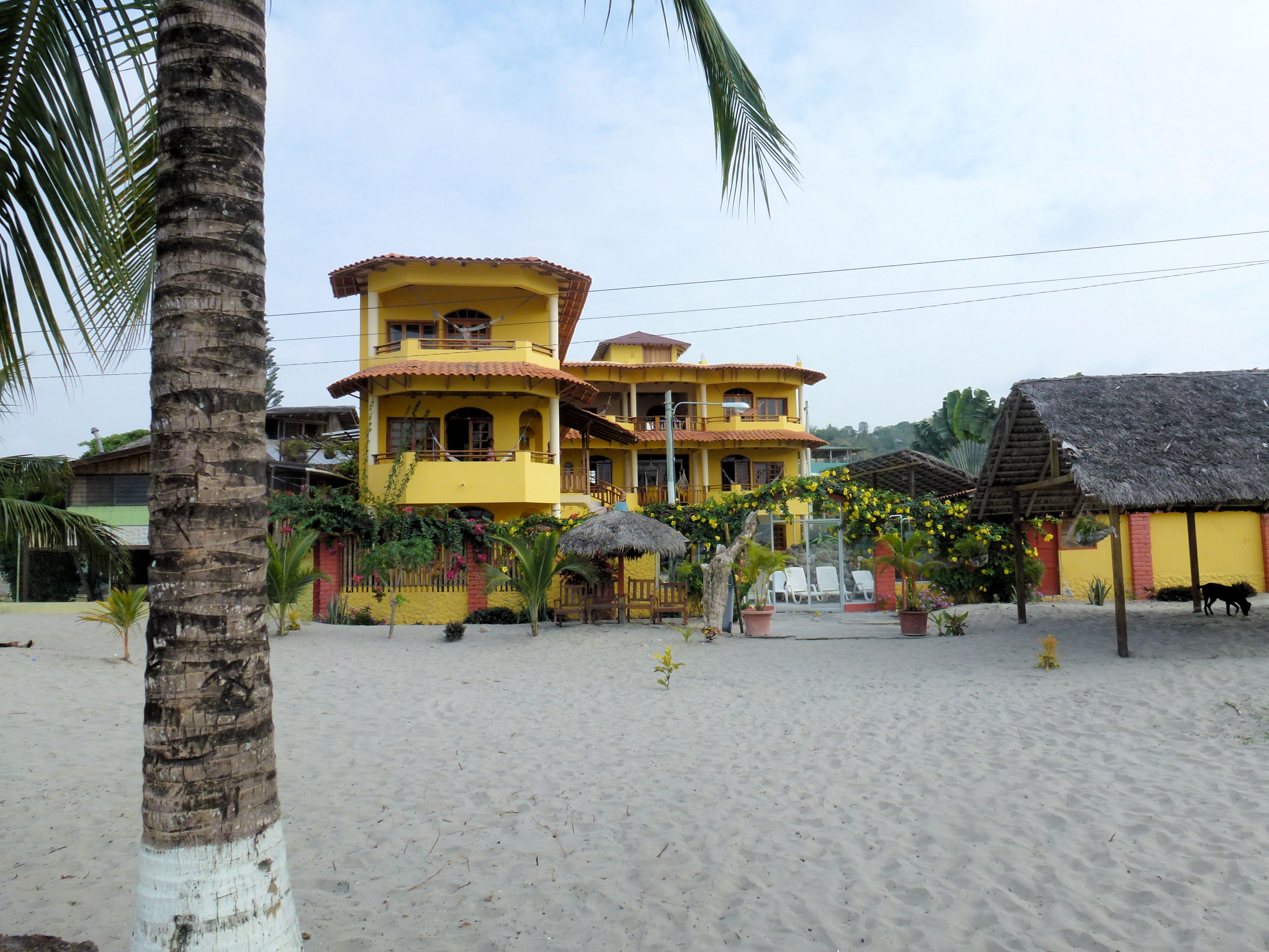 Real holiday feelings I've had in the fourth week in Atacames at the beach. The journey from Quito to Atacames goes through various climatic zones: From the sierra (Quito) through the subtropical zone (foggy forrest) to the tropical zone (Atacames/Esmeraldas). We've made a stopp in a restaurant which is also a spotting place for kolibris. I've been fascinated of the many kinds of kolibris and of the fact that these little tiny birds can stand up in the air because of moving there wings the way they do.

Atacames is a very popular holiday spot, also for the Ecuadorians. Many very creativly decorated bars along the beach promenade and the various little markets with souvenirs are evidence for the popularity of Atacames. This has been the place to relax a bit, to think about all the thins I had seen during the last weeks and to enjoy my last week of holidays combinated with Spanish classes. In the mornings I've enjoyed the Spanish classes and then we've gone for a little walk at the beach. After having lunch we've made excursions by car and discovered the region or we've gont to another beach or we've driven out the ocean by boat. There was also always some time for swimming in the warm nice water. On the journey back to Quito I've had the opportunity to visit the butterfly farm in Mindo. This was also really a special experience for me. I knew that there are lots of butterflies in various sizes, colours and designs. But that  the cocoons are also that manifold I did not know. There were green ones, brown ones and golden shiny ones, depending on where the buttonhole or the butterflies live. 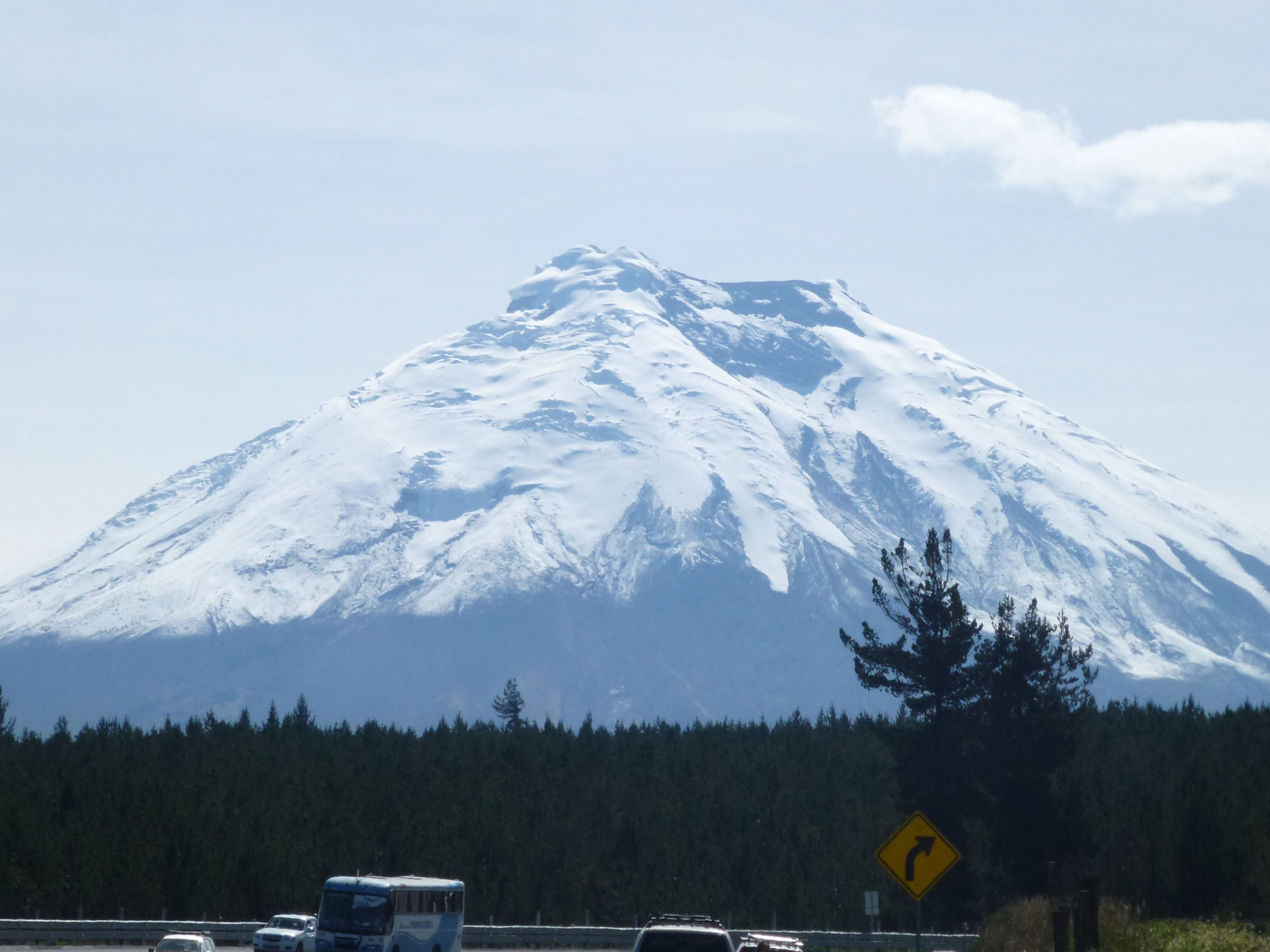 To bypass the days until my flight back to Switzerland I made another excursion to the Cotopaxi volcano with Sintaxis. 1 ½ hours driving by car from Quito the Cotopaxi Nationalpark is located. There I've got to know a completely different landscape. It starts with green coniferous forest, changes to a kind of veld and ends in a concrete jungle at the addiction to the Cotopaxi volcano. The ascendency from the parking area up to the snow line and the refugio on 4'800 meters was only a level difference of 300 meters but you should try it slowly. Fortunately the look back disclosed a overwhelming view. That was the best excuse for some minutes of relaxing before taking the next steps up to the refugio.

I've been asked various times which has been the ultimate highlight of my stay in Ecuador. Every time I had difficulties answering that question. Were the anacondas the best? Or the canoe trip on the big lagoon in the jungle? The iguanas on Galapagos? The snorkeling with the sea lions and turtles? The kayaking in the tortuga bay? The kolibris and butterflies? My trip to the Cotopaxi Nationalpark? I've got to know so many different worlds in Ecuador how can I compare them? Or maybe it was my joy about my progress in the Spanish language?

I've seen a lot, done a lot, learned a lot and owing to the perfect organization and the friendly and attentive support of Sintaxis I could enjoy my stay in Ecuador to the most. It's just not possible to reduce my time in Ecuador on one single highlight. It was just an unforgettable time! Thanks to Sintaxis.